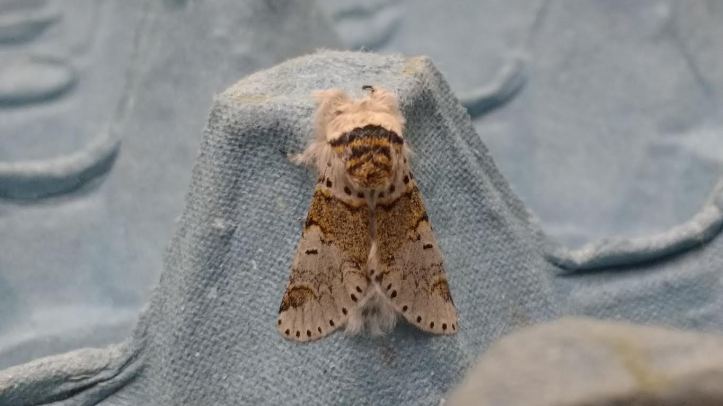 Things have certainly stepped up a gear since my last Moth Diary post just over a week ago with the number of Moths attracted to the trap reaching new heights and a further 8 new species collected in just the last 3 nights of trapping. With the mothing season set to kick into full swing from late May right through to October, the sheer number of new species I’m likely to find myself inundated with means that these posts are going to be difficult to keep short! From this point on, I will picture most of the new species but the text will be shortened in some instances to just the key facts. I hope this will not affect the enthusiasm for which these posts have been received. With the main aim of the ‘Moth Diaries’ series being to introduce you to the wealth of moths that are likely using your gardens as a feeding stop (which being creatures of the night often go unnoticed) I hope that they will continue to serve this purpose and shine a much-needed light on these amazing creatures.

Despite the weather being up and down (cold and windy again this week) there have been hints of the warmer nights to come. The bank holiday weekend produced a couple of 10c+ nights and with it came the moths in droves.

First in was the lovely Powdered Quaker (above), itself a nice change from the Common and Small Quakers I’ve had in abundance so far this year. You can see from where the name derives with that lovely light mottling, as if sprinkled with fine ash (click image to enlarge). The classy colouration and markings make for a very smart-looking moth.

A couple of Micro moths rolled in next and they are well deserved of a mention. When I say Micro though, I really do mean micro. This Argyresthia trifasciata (also know as the Triple-barred Argent) is no larger than 5mm in length (I could have done with a microscope!). Only discovered in this Country in 1982 it can be found now wherever the food plant is present (Juniper or Leyland Cypress). Well worth mentioning for the gorgeous gold leafing detail and those splendid white bands.

Not much larger was this Pseudoswammerdamia combinella (also known as the Copper-tipped Ermel) at just 8mm in length. This understated moth can be found wherever Blackthorn grows between May and June. Micros can be difficult work; with 1800 species in the UK, many, especially to the naked eye, appear remarkably similar and so proper identification can be quite the challenge. Many Micros are so small that they appear merely as nondescript, tiny black insects or flies; it is only on closer inspection that a vast array of magnificent colours can be seen within the wing scales.

Back to the Macros and the next new arrival for the year was the Waved Umber. With only a single generation in each year this distinctive mid-sized Geo can be found on the wing from late April through to June though is only common in the Southern half of Britain and is completely absent from Scotland. The main larval food plants appear to be Lilac and garden Privet.

Who says moths are dull and boring? This Brimstone Moth on Sunday night was my first of the year and likely to be the first of many (not that I mind) as they are one of Britain’s most common moths. With up to three generation in a single year they can be found on the wing from April right through to October. Much like the Brimstone butterfly (although arguably brighter) this moth is almost completely lemon yellow (head, thorax and abdomen included) save for some copper smudging, faint black bar-lines and two blue-silver crescent moon markings on each forewing. At rest, the Brimstone moth holds its wings upright and could quite easily be mistaken for a small butterfly. A welcome colourful addition to the trap at this time of year.

The Pug moths are famous amongst moth’ers for causing a headache or two; with dozens of varieties, most small, flighty and similar in appearance they are an identification nightmare. They might not be all that spectacular to look at (there are a couple of beauties though) but they do add to the variety in shape and design. This week I have added Common and Brindled Pug to the Double-Striped I’ve been getting since March but the fourth pug to arrive was a little easier to Identify. You can see why this White-spotted Pug is called what it is.

The moths just kept on coming on Sunday night and I was delighted to add the Pebble Prominent to my Garden list. This large bodied, fury and spectacularly marked moth is a bit of a looker. The name derives from the circular markings on the forewings. It is a common moth throughout the British isles and can carry to two generations depending on latitude, flying between May and August. Although common, they do tend to prefer damper habitats where the food plants can be found in abundance, namely Poplar and Sallows. Having said that, within sight of my garden trap neither of these tree families are present; the nearest grouping probably some 1000+ metres away in the edgeland which goes to show, with the light on anything can happen.

I was more than delighted to find the next species in my trap for numerous reason. The Chocolate-tip is an unmistakable species, sporting that rolled-up cigar look most commonly associated with the Buff-tip (who’s camouflage is incredible, but we will come to that in a future episode, hopefully). So-called for the red-brown wing-tips and matching crown and feet, the colouration is immediately identifiable. With head tucked in and just the crown on display, the moth becomes a twig-tip, giving it an almost alien appearance. Distribution is somewhat disjointed, being most common in the southern half of England and Wales it exists only in pockets of Scotland. Two generation in England fly between April and May and then again in August and September whilst the Scottish population is a single brood on the wing between June and July. Considered rare or rarely recorded in Leicestershire, numbers have steadily increased in recent years and the status of the Chocolate-tip in the county looks set to be reviewed. I’m pleased because they do not appear in great numbers, especially in Leicestershire and are usually regarded as a woodland species with the larvae feeding predominantly on Poplar, Aspen and Willow.

Last but absolutely not least is the Sallow Kitten (leading photograph, my own) which arrived somewhat unexpectedly last night when temperatures had eased below 5c and the winds were practically gales. The most common of our ‘Kittens’ they are so-called for the fury head and front legs (supposedly resembling a kitten) but don’t let abundance take anything away from what is undoubtedly one of our finest, most attractive and endearing moths. Beautifully marked, the Sallow Kitten is mainly black and white with some orange speckling though it appears I got particularly lucky with this one; full golden band across the wings and those beautiful buff-orange crown stripes. To find this clinging to one of my egg cartons was a real treat on a night that I really wasn’t expecting anything at all. With two broods flying between May and June and then again in August I really hope to see more of these over the coming months.

Moths? Boring? Brown? The Butterflies drab cousin? Take another look, you have to admit; this one deserves a bit of a knee-rub. 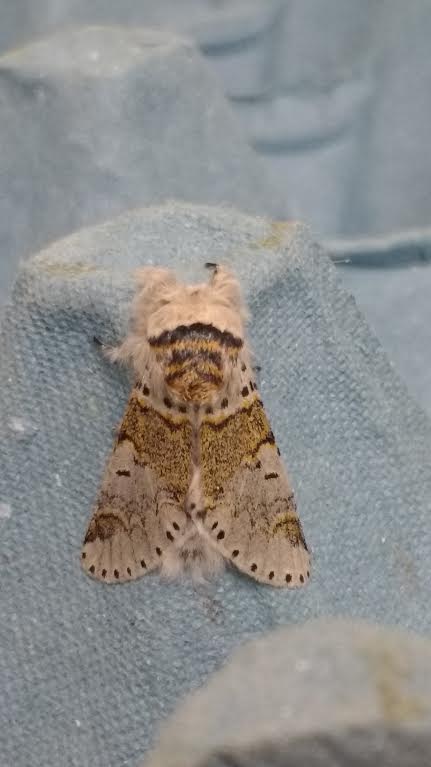